Kichachiro Onitsuka, founder of the Japanese athletic shoe company Asics, one day saw a chunk of octopus meat clinging to the plate. He had an “a-ha!” moment: why not use suction cups like those on octopus tentacles on the soles of basketball shoes? This thought resulted in the suction cup soles on the 1951 basketball shoe, making the shoe capable of gripping a basketball court and allowing the wearer to stop on a dime. The shoe, named the Onitsuka Tiger, was worn by the Japanese Olympic basketball team in 1956, which ultimately propelled the company into the biggest athletic footwear and apparel maker in Japan and the fifth-biggest in the world. 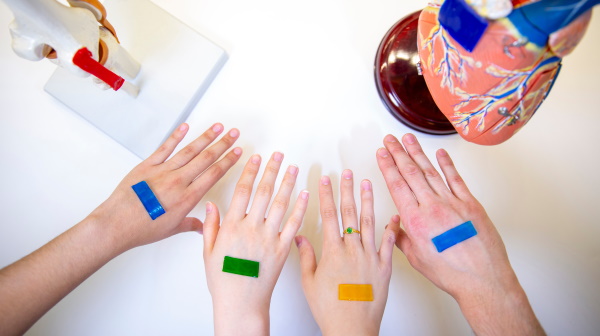 Scientists at Harvard and McGill Universities are using foetal skin as inspiration for new bandages that can rapidly heal wounds. The gel-based, heat-activated design was inspired by the Wolverine-like skin we have when we’re in the womb.

Foetal skin regenerates itself when injured, and without scarring. Embryonic cells produce protein fibres that close up rapidly and tightly, contracting the skin around a wound. Adult skin does this to some extent, but not to the same degree. The scientists believe they have developed a way to coax our skin back into its younger self when it needs healing.

The dressings, called active adhesive dressings, are made of “thermoresponsive tough adhesive hydrogels that combine high stretchability, toughness, tissue adhesion, and antimicrobial function.” The new dressing is stickier than conventional dressings and is activated when exposed to body heat. It also contain silver nanoparticles whose antimicrobial properties further boost healing.

These types of bandages have only been tested on pig and mouse skin, where they close and heal wounds much faster than traditional bandages. In addition, there is no inflammation or immune-system response, showing that the dressings are safe to use on living tissue.

Computer modelling has suggested that the bandages would be as effective on human skin, and testing this on humans is the next step.

If workable, these dressings could be used not only for nasty cuts and scrapes, but more difficult-to-treat skin injuries like diabetic ulcers and pressure sores, for drug delivery, and as components of soft robotics-based therapies. The design could also be modified for other medical purposes.

A property that should be tested on human skin is whether the bandages are effective in different medical scenarios and conditions, for example in cold weather, which affects the skin’s temperature.

Researchers have developed a material that changes colour when exposed to light. The material was inspired by the way chameleons and cuttlefish change colour. 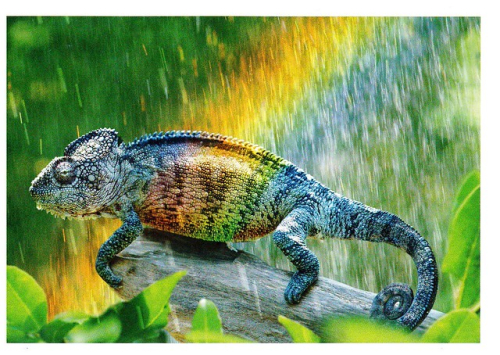 Chameleons change colour because of chromatopores, which are skin cells with contractile fibres that move pigments around. The pigments are spread out to show their colour, or squeezed together to make the cell clear.

The artificial chromatophores developed by the Cambridge (UK) researchers work on the same principle, but instead of contractile fibres, their colour-changing abilities rely on light-powered nano-mechanisms, and the ‘cells’ are microscopic drops of water.

The shape and size of the clusters can be controlled when the nanoparticles are loaded into the microdroplets, resulting in dramatic colour changes.

The geometry of the nanoparticles when they bind into clusters determines the colour, for example, when they are spread apart they are red, and when they cluster together, they are dark blue. However, the droplets of water also compress the particle clusters, causing them to shadow each other and making the clustered state almost transparent.

The new material is in a single layer, and so can only change to a single colour. However, different nanoparticle materials and shapes could be used in extra layers to make a dynamic material, like chameleon skin.

Posted by Martie Groenewald at 11:56 AM in Bionics, Creativity | Permalink | Comments (0)

This is only a preview. Your comment has not yet been posted.

The letters and numbers you entered did not match the image. Please try again.

As a final step before posting your comment, enter the letters and numbers you see in the image below. This prevents automated programs from posting comments.

Having trouble reading this image? View an alternate.

Comments are moderated, and will not appear until the author has approved them.

(Name is required. Email address will not be displayed with the comment.)

What is the Sceptic's Tarot?